Where are Freddie Prinze Jr and the rest of the stars now? 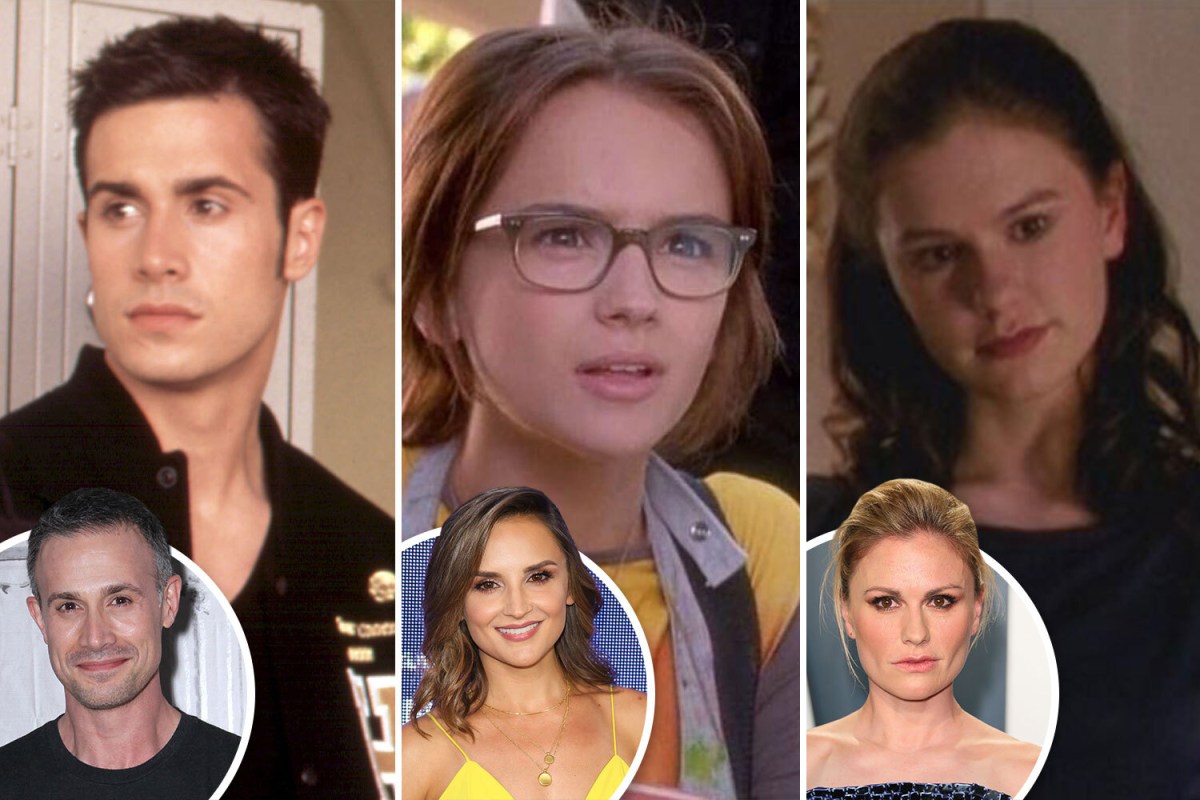 Before He’s All That, the Netflix remake of the 1999 rom-com She’s All That, releases on Friday, catch up on what the original cast is up to now.

The ’90s film – which spawned the 2001 parody flick Not Another Teen Movie with Chris Evans – focused on popular jock Zack (Freddie Prinze Jr.) trying to turn “nerdy girl” Laney (Rachael Leigh Cook) into the prom queen after a bet with friends.

In 2001, she led the cast as the titular character of the cult classic, Josie and the Pussycats – a musical comedy based on the Archie Comics of the same name.

Rachael continued to have a varied resume of films and shows in all genres, including more thrillers like Tangled, Bookies, and American Crime.

She starred opposite Emma Roberts in the 2007’s Nancy Drew, based on the mystery novels of the same name.

Throughout the 2000s and 2010s, Rachael worked on shows like Las Vegas, Ghost Whisperer, Psych, and Robot Chicken.

From 2012 to 2015, the 41-year-old starred as Special Agent Kate Moretti on TNT’s FBI drama, Perception, with Eric McCormack.

The same year the show premiered, RLC put her rom-com skills to use with fellow rom-com star Chad Michael Murray in the hilarious Funny or Die sketch about first kisses.

After Perception ended, she jumped head-first back into the world of rom-coms with a slew of Hallmark movies, including her popular Autumn in the Vineyard franchise, which she was an executive producer on.

Among her other Hallmark movies, aside from starring in Frozen in Love opposite Niall Matter, she also helped create the film’s story and worked on the flick from the ground up.

She produced and led the 2020 flick Love, Guaranteed, which featured Damon Wayans Jr as her love interest.

Next up, she’ll be seen in the She’s All That remake, He’s All That, where she’ll be playing Anna Sawyer, mom to Addison Rae’s character Padgett Sawyer.

The actress, who shares two kids with ex-husband Daniel Gillies, is also working on a new movie for Netflix, A Tourist’s Guide to Love, based on an original idea of hers.

It’s being written by A Sugar and Spice Holiday writer Eirene Donohue and produced, alongside Rachael, by Jim Head, who’s worked with the 41-year-old actress on a slew of movies at Hallmark.

Freddie, 45, continued down the rom-com path following his role as popular jock Zack in She’s All That.

He starred opposite Julia Stiles in Down to You, opposite Claire Forlani in Boys and Girls, Monica Potter in Head over Heels, and Jessica Biel in Summer Catch.

In 2002, Freddie married his I Know What You Did Last Summer and Scooby-Doo co-star Sarah Michelle Gellar, and the pair share two kids – Charlotte and Rocky.

On the TV side of things, Freddie had his own short-lived sitcom in 2005, starred in season 8 of 24, and voice-acted on Star Wars Rebels.

He recently starred as Travis in Peacock’s Punky Brewster revival, which was canceled earlier this month after one season.

Just two years after Paul, as Dean Sampson, Jr., made a bet with Zack that he couldn’t turn Laney into prom queen, he had his major breakout role with the launch of the Fast and the Furious franchise.

In 2001, he played Brian O’Conner for the first time in street racing action flick The Fast and the Furious, opposite Vin Diesel, Michelle Rodriguez, and Jordana Brewster.

Paul continued reprising the role for sequels in the franchise until his death at the age of 40 in 2013.

The late actor was involved in a car accident, and the Porsche he was traveling in crashed into a concrete lamp post and tree at a high speed before catching fire.

He, as well as his friend Roger Rodas, who was driving, were killed in the crash.

The actor passed away from the combined effects of trauma and burns.

Paul had one child, daughter Meadow with ex Rebecca Soteros, who was 15 at the time of his passing.

He last appeared in the posthumous releases of movies Brick Mansions and Furious 7 in 2014 and 2015, respectively.

Showing off his extra goofy side, Matthew played Shaggy in the live-action Scooby-Doo movie in 2002 and reprised his role in the 2004 sequel.

The 51-year-old, who played Zack’s ex’s new guy, Brock, in She’s All That, later voiced the role in a slew of animated Scooby-Doo movies and shows.

He also starred in films like The Perfect Score, Without a Paddle, and Scream 4.

In 2013, he began his time as Daniel Frye on the FX crime-drama, The Bridge, which ran for two seasons.

Matthew just wrapped up his time as Dean Boland on NBC’s Good Girls after the show was canceled in June.

Along with Rachael, Matthew will also be taking part in He’s All That, and while little is known about his role, he appeared in the movie’s trailer.

The 42-year-old starred on the fan-favorite Fox series, Prison Break, for a couple of seasons as an operative, before going one to do some episodes of The Big Bang Theory, Lost, and Castle.

In 2014, she joined The CW’s The Vampire Diaries as Jo, a doctor and, eventually, Alaric Saltzman’s (Matt Davis) fiance.

The same year, Jodi took on a main role in the VH1-turned-BET sports drama, Hit the Floor, as Lionel Davenport, Pete Davenport’s ex-wife and Oscar Kinkade’s new one.

The model and actress reprised her role as Jo in the Vampire Diaries’ spinoff, Legacies, in 2018, which was also the same year Hit the Floor ended.

Kieran, whose brothers Macaulay and Rory are also famous actors, was in a few movies throughout the ‘90s before taking a break in the early-to-mid 2000s.

In 2008, he made his return to acting with the dramedy Lymelife, which also starred Emma Roberts and his brother Rory.

The following year, he was in the indie flick Paper Man with Ryan Reynolds and Emma Stone, and then in Scott Pilgrim vs. the World with Michael Cera in 2010.

The 38-year-old’s recently found major success as part of the ensemble cast of the HBO drama Succession.

On the show, he plays Romay Roy, the thind and youngest son of the Roy family, with Brian Cox playing his dad; Brian, and Alan Rucck, Sarah Snook, and Jeremy Strong playing his siblings; and Nicholas Braun as one of his extended family members.

He’s been nominated for Golden Globes and Primetime Emmys for his role on the series.

Just a year after She’s All That was released, Anna had three big movies – the start of her portrayal of Rogue in the X-Men franchise, a role opposite Kate Hudson in Almost Famous, and  the Gus Van Sant flim Finding Forrester.

In 2008, the actress got her big leading role in HBO’s popular vampire drama, True Blood.

While playing Sookie Stackhouse on the series, which was based on Charlaine Harris’ The Southern Vampire Mysteries books, she met her now-husband Stephen Moyer.

The pair started dating after meeting on the set of the show and have been married since 2010.

Anna recently starred in an episode of Amazon’s Modern Love series, as well as two seasons of her British dramedy, Flack.

After playing Preston in She’s All That, Dulé starred alongside Shia LaBeouf in the film adaptation of Louis Sachar’s popular novel, Holes.

When the 2003 flick came out, he was in the middle of his run as Charlie Young on NBC’s long-running drama, The West Wing.

He quickly moved on to lead a new show, this time a comedy-drama, the same year his previous one ended in 2006.

The 46-year-old starred as Gus in USA’s Psych from 2006 to 2014 and has recently reprised the role in multiple revival movies.

The New Jersey native also joined the cast of USA’s Suits for a few seasons before it ended in 2019.

Next up, he can be seen in The Wonder Years remake for ABC, which premieres on September 22.

After making a name for himself in the Mighty Ducks trilogy, Elden played Laney’s friend Jesse Jackson, who helped convince her to give Zack a shot.

The 43-year-old went on to have roles in movies like Cast Away, Under the Tuscan Sun, and The Hunger Games: Mockingjay, both part 1 and 2.

Most recently, he’s best known for portraying Foggy Nelson in Netflix’s Marvel series, Daredevil, which ran from 2015 to 2018.

During that time, he also brought back the character for episodes of The Defenders, Jessica Jones, and Luke Cage.

He’s All That, the gender-swapped remake starring Addison Rae and Tanner Buchanan, releases on Netflix on Friday.

“She swears she can turn scruffy antisocial Cameron [Tanner] into prom king material. But things get complicated when she finds herself falling for him IRL.”